I was trying to help a player joining my campaign to pick a destiny, when I realized: There isn't one for all the badflank motherbuckers out there who kick tail and take names!


Big Damn Hero:
4 - A legend in your own lifetime:
You're pretty awesome, and people are starting to know it. You gain the talent 'sweet and elite' and once per day can choose to turn a persuasion check to intimidate into a nat20.

7 - Badflank
The forces of evil far and wide have begun to speak your name in hushed whispers. Once per day, you can defeat a non-boss enemy encounter just by looking at them warningly. In addition, you have become trusted for your competence, gain a +4 to persuasion checks on allied or neutral parties.

10 - Buck Norris
Even the forces of nature won't mess with you. Death won't touch you for fear you'll take his lunch money. Disease doesn't trust that it won't get a kick in the face. You'll be the grizzled badflank you are, until someone greater than you takes you down. Become immune to ALL death and damage outside of combat (including aging, I guess you punched Time off camera).

Implementation of the seventh one might require some extra thought on the part of the DM, but the ability to neutralize those pesky filler enemies could be exactly the kind of satisfying-to-use power I think some players would love to have. 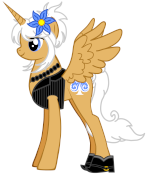