That's it? That's your destiny? Getting to be an old fart? The others get to be archmages or dragon riders or legendary knights, but yours is to grow old? Gyp!

This stinks! -1/Session
Your frustration at what you perceive to be a slight by the universe is so great that, once per session, you can have any one skill roll be treated as either a natural 1 or a natural 20.

Oh, wait a minute...
It finally sunk in. Of all your friends, what makes you special is that you'll live to old age. Just you. Well you're not going to let that happen! You can still use This stinks!, though now your anger comes from the fact that Destiny is saying that your friends won't live to be old gray mares. And if you have your way, you can screw Destiny and see to it that they make it.

You gain the utility talent I'll Rainbow Dash to Your Side. In addition, you also gain a +30 bonus on any skill check you make to actively try and rescue a friend from a life threatening situation.

Well technically you can. Old age is what will do you in after all. But nothing else will. No mater what happens, you will be saved by something. Falling into a volcano, being stranded on a desert island, trapped at the botom of a dried well. You just won't die, though admittedly with the last two your ability to interact with the world is rather limited; you just can't die, nothing says you can't be trapped. Even combat can't kill you. If an attack in combat would render you dead, it instead knocks you into a coma for 1d4 weeks. Yeah, immortality hurts. Also, this protection doesn't extend to anypony else. If you and a friend are dropped into a volcano, only you get the magic safety net. Your friends gotta figure out a way on his own. Of course, since you are guaranteed to make it, maybe you should spend that time figuring out how to save him?

In the event of a TPK, you're still the last survivor, but the guilt of failing to stop it is so great that you retire from the world, becoming a bitter hermit (still technically resulting in a TPK). In the event that your team succeeds in its final quest, you are sure to go on to have a rich and long life, and though your friends don't live as long, it was still a good life.

Whiteeyes wrote:In the event that your team succeeds in its final quest, you are sure to go on to have a rich and long life, and though your friends don't live as long, it was still a good life.

Well, until you find out your friends are a lich, a disciple blessed with the longevity of a dragon, and a miracle worker who has Immortalis...

I think the weakness of this destiny is that its flavour is weak in two ways. First, most obviously, is that other destinies sound much cooler. While that is the joke of this talent, the fact that everyone else gets cool stuff and not you, it still doesn't make the destiny appealing. Yes, you could find out your destiny is just growing old and have fun role playing with it, but does that compare to being an explorer or inventor or even simply going mad? Destinies shapes out a character's future, but a character's personality remains in your control. An excellent example is Archlich. The Book of Fate document even states that archliches don't have to be evil, and gives some example. Players also choose how evil or "evil" their characters are with the Vile Villain destiny. The only real exception is Master of Madness, but even then you choose how your madness is shown. With this, your only reasonable angle is grumpy, which is kinda limiting...

The second point is that destinies aren't something your character finds out immediately. All the other destinies have a theme of growing or evolving. Sure, characters might dream of becoming the most powerful wizard, or invent something that can revolutionise the world, but they won't know if it comes true when they start out. I doubt Level 4 Dragon Disciples are aware that their newly gain teacher is soon to pass on and will grant them everything, and I think the thought wouldn't even cross their minds. With the YSGO destiny, your character becomes aware of the outcome of their destiny. How else would they know they grow old? This will lead to an moment where the GM, somehow, has to tell your character that they will live to an old age and not do anything else with their life (I mean, except the quests they go on), and the character has to believe it to be true, at least to the point that allows the character to be grumpy enough to use This Stinks, while also allow leeway so the character can die if they die before level 10, but also not having any way of proving the destiny false before they die. It becomes a juggling act that the GM must prepare for. And any GM who does manage not to make it awkward is a magician or something...

I mean, you could flavour it differently, but your character will still not feel like they grow more powerful over time. They just kinda stay the same, and it'll be kinda weird when every other character changes...
_________________
Ellipses are kinda my thing... 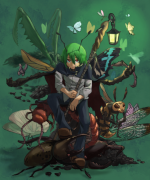 Similar topics
» How well will Hedera helix grow during winter in Florida?
» how to grow Chrysanthemum?
» How I grow my Ficus
» Grow roots faster
» What trees can I grow in my area?